Another project I forgot to post in a timely manner.  I was asked to build this as a gift for a little girl I know, and I simply couldn’t resist the chance to try something different.  This is a super simple little project that can be completed quite quickly from leftovers.  Mine happened to be walnut. 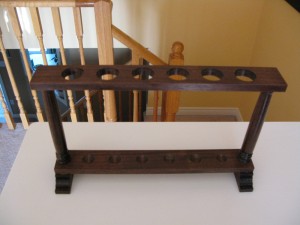 The top and bottom of the rack are resawn from a scrap that was about 16″ long and 1 1/2″ wide, yielding two pieces about 3/8″ thick.  The test tubes were 7/8″ in diameter, so I drilled 1″ holes with a forstner bit along the top, and I dimpled the bottom strip by mounting a 1″ core box router bit in my drill press.  I should have used a plunge router for that instead – there was a lot of chatter.  The feet were band sawn and glued on.  I shaped both feet as one thicker piece free hand and then sawed them in half to get two pieces. 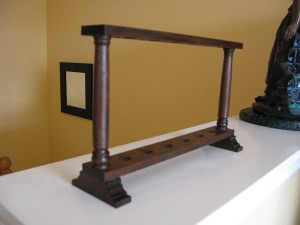 The turned columns are roughly inspired by some traditional examples I found online.  They started out as rough 4/4 squares.  I turned the first by eye and then used it to mark out the second.  They’re not perfectly identical, but they turned out similar enough to satisfy me.  The corner joints are round tenons set into round mortises drilled out with a forstner bit for a fairly tight fit.

The finish is black walnut danish oil followed by wipe on polyurethane.  This is quickly becoming my go-to finishing schedule 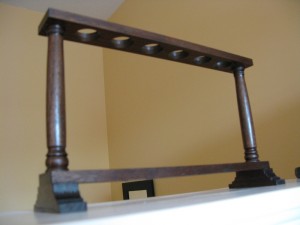