Installing a Cast Iron Router Wing in my Ridgid TS3650

Installing a Cast Iron Router Wing in my Ridgid TS3650

General International offers these cast iron router tables that happen to also fit as table saw wings.  Their website doesn’t really have much/any info about it as I write this – it’s linked as an accessory to a router table package.  When I was at the Hamilton Woodworking Show back in January, I saw one set up on a sheet metal stand and noticed the holes drilled through the back of the casting.  Interestingly, the packaging doesn’t refer to itself as a table saw wing at all.  BUT … the dimensions were 16″x27″x1 1/2″, which is theoretically a perfect match for my saw, so I ordered one.  Furthermore, there were no instructions included with mine, nor was there any mention of a “table saw” any where in, on or near the box.  The sales reps I spoke to at the show did confirm my suspicion that that it was intended for table saw use though. 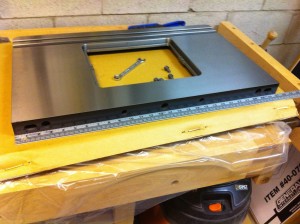 Taking it out of the box, I measured the hole spacing and checked out where the bolts are positioned on my TS3650’s wing.  It looks to me like they drilled the casting to be compatible with a few different saws, and there were 4 holes that matched the spacing I needed.  The holes leave plenty of room for adjustment – so much so that I needed to go get some new bolts and washers.  The existing wing was a slightly lighter casting, so the original bolts were a little short.

Along the outside edge, there is a mitre slot and a slot for T-bolts that will be handy for affixing feather boards (if I ever come around to using them).  The mitre slot happens to fit my OEM Ridgid mitre gauge perfectly with no slop at all, so I’m pleased about that.  There’s no provision for attaching a fence, so I plan on building a new fence to attach to my table saw fence based on the New Yankee Workshop‘s design.  On the under side of the casting, there are tapped holes for mounting bolts for the sheet metal stand and for a dust collection enclosure that fits around the lift and router.  I plan to build or buy such a dust collection enclosure at some point.  It was quite reasonably priced at the show compared to building a comparable solution. 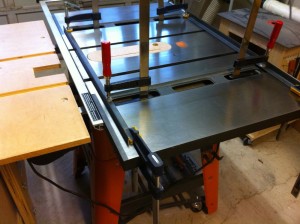 My first step was removing the old wing.  Since I was working alone, I decided to rig something up to help support the weight as I un-bolted it from the side of the top.  I had some pieces of angle iron sitting in the corner at a convenient length, so I clamped them across the table to both wings of the saw.  4 clamps on the side I was removing and 2 on the side I was keeping. 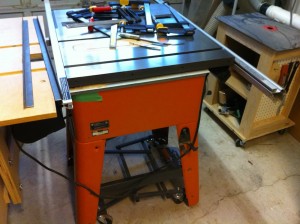 I had to remove the plastic end-caps from the extruded aluminum fence rails and loosen a bolt between the wing and each fence rail.  Just to be safe, I also loosened the power switch box and slid it out of harms way toward the centre of the front rail.  With the old wing’s bolts removed, I slid it out from between the rails like a drawer and then took off the angle irons and clamps. 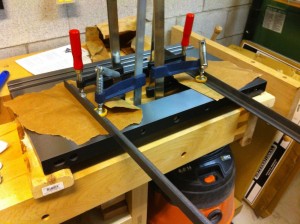 clamps and 2x2s if you do this – I’d guess the total weight was about 80 pounds.  I didn’t get any pictures of lifting the new wing into place or bolting it on, as I had my hands quite full with that.  I aligned the top edges of the wing and the table saw top, using my finger as a gauge and tapping gently with a wooden mallet to make fine adjustments.  I didn’t quite get that perfect unfortunately, so I’ll have to go back, loosen it off, and give it a few more taps at some point.

along the front, I avoided having to shim on both sides.  I used my digital calipers to measure how far the front of the wing casting stood proud of the centre section of the table saw and stacked stainless steel shim stock to sit between the front fence rail and the table top.  It came out to be about 0.020″ worth of shimming.  In retrospect, I probably should have put the error along the rear rail instead of the front but it seems to work OK.  After re-installing the front fence rail, I discovered that I needed to drill a hole through the wing casting to accept the fence rail mounting bolt.  Drilling cast iron is easy – lubricate and drill with 2-3 progressively larger drills to reach your desired size. 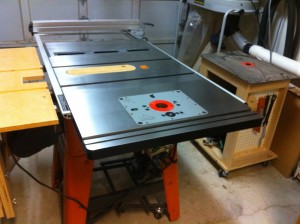 In the pictures, you can see my new router lift.  There was nothing to installing that beyond following the instruction manual.  Once I’ve had a chance to use this setup for a couple of projects, I’ll write up a review of both the wing and the lift.  My initial impressions are really positive.  Doing this has had the desired effect of eliminating my free standing router table.  I’ll need to do a little re-arranging to realize all of the benefits of that, including finding a new home for my bits and router bases, but right now, I’m pretty happy.

Update, February 2, 2015:  I’ve recently added a dust collection box under this router wing to collect dust from under the table in addition to the dust port on my fence.